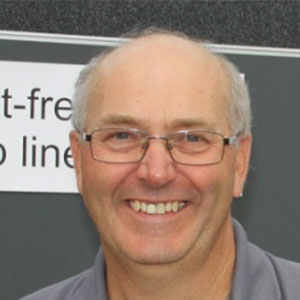 Going peat-free is the latest development for Lineside Nursery where liner production is overseen by proprietor Martin Mobbs, all the way ‘from cutting to customer’.

Martin trained in commercial horticulture at Writtle Agricultural College, completing his OND in 1981. His pre-entry year was spent at Lee Valley Experimental Station, which ignited his desire to be at the forefront of the industry. Martin gained valuable experience in hardy nursery stock during his sandwich year at Blakedown Nurseries and subsequently at Fordham Nursery, where he progressed from chargehand to production manager.

During this time, Martin reached the finals of the inaugural Young Horticulturalist of the Year and he was a founder member of the Eastern Nursery Stock Growers group.

In 1992 Martin set up his own shrub liner business and for the next 10 years traded under his own name from a rented site in Leicestershire. He then built his own nursery alongside the West Coast Main Line in Rugby and began to trade as Lineside Nursery. He continues to supply good quality shrub liners to a wide range of nurseries across the country, especially small retail nurseries.

Martin always seeks innovative ways to improve his nursery. Companies such as Access Irrigation and Melcourt have trialled some of their products there. In 2017 Martin had a problem with his heart and, while on a 14-month NHS waiting list, decided there must be a solution to his difficulty in handling 200 litre bales of peat. He began to investigate peat-free alternatives and was delighted with the results.

Lineside Nursery is now completely peat-free and Martin has recently been joined in the business by his wife, Janet, who has given up teaching to help with increasing demand. Martin continues to learn from, and to encourage, others in the industry.

I’m looking forward to Going for Growth 2020 because it is a rare opportunity for a specialist nurseryman to hold conversations with other growers, suppliers and customers, resulting in a greater understanding of how we can act together to move the UK hardy nursery stock industry forward.